Those who seek and praise you in darkness will find you there. Psalm 18 gives an exciting picture of  God's immediate response to the Psalmist's cry. You will come to the cry of help, bowing the heavens and riding swiftly on dark clouds. You ride upon a cherub and speed with the wind. You will shake the earth with anger at my enemies. Thunder will be your voice and lighting will be your arrows hurled across the sky .

You will draw me out and deliver me from my enemies into a large place. You are my champion. I am your prize. I am hidden with Christ in God. Col 3:3

I cannot run from darkness. I find you there. I stay until I find you and then I will have light. And when I find the light, then I will know my way. Life is birthed in the dark. The plant in the seed, the baby in the womb. God does His greatest work in our darkest places. If it seems long, it does not mean hope is gone. Keep looking for His light. 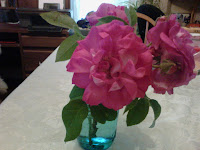 How fragile a flower! Emanating fragrance and exhibiting beauty, roses cut from her garden were a shade of pink all my senses were drawn towards. As she spoke of them, she used the word aggressive to describe their thorns. I watched, cringing inside as she took the flower in her hand to arrange it in the vase, thinking "oh, don't crush it”. She didn't. Her hands are strong but she knows just how much force to use to not change its shape. I was so happy to bring them home to sit on my own table.

For the next few days as I recounted the events and conversations of my time with her, I thought about the thorns. I outlined them with my fingers. They were sharp. The petals will fall soon enough on their own without any intruders, but they all come equipped with a fortress.

Plants neither move nor speak. Thorns serve them well. They are a defense system meant to ward off predators. Do I have thorns? Do I have predators? I love peace, but I honestly admit I spend much of my time searching for it. My opinions and choices do not always line up with others, thus sometimes causing irritation.

The Psalmist’s plea for God’s unfailing love is my plea also, for my thorns I fear have been aggressive, and I sense I have turned my anger on those sharp points and tried to match them far too often, and I am the one who so often bleeds.

I read of a thorn that the Apostle Paul was sent, a messenger of Satan. The word buffet, as used in the King James version, means to beat in contention; a blow with the fist. When he prayed for God to remove it the answer was “My grace is sufficient for thee, for power is perfected in weakness”. We are not told what the thorn was, perhaps a person, maybe something physical or emotional, but whatever it was, God said no. If you read further he goes on to say he boasts about his weaknesses.

When was the last time I boasted about my weaknesses? Rather than boasting I am more likely to curse. I notice there seems to be a distinction between thorns and weaknesses. Paul had weaknesses in his body, maybe from aging, or maybe from birth. The thorn he was given was from Satan. Whatever he had wasn't being removed.

I praise you because I am fearfully and wonderfully made; your works are wonderful, I know that full well”. Psa 139:14.

How should I respond to what God allows? I am to be focused on Christ and who I am in His eyes. I may have thorns, but I am a beautiful creation. The purpose of the thorn is to keep my attention and reliance on my creator. Instead of using them as swords for battle, rather I should use S-words, God's word, which is sharper than any two-edged sword,. Heb 4:12. It is one that can both cut and heal. It is a discerner of the intents of the heart. It is both sharp words and soft words…S-words.

In today's world we are fighting for our rights...racial, religious, moral, cultural, gender, children and elderly. Our resistance to peace only sharpens our thorns and turns them to swords. Everyone is left bleeding.

We are all seeking peace. We get further away with every conversation. “Christ said “Think not that I am come to bring peace; I came not to send peace, but a sword”. Mat 10:34. That tells me that the fight is important, but there is a way to fight. I don’t take my own sword in hand, but I let His sword bring about victory while I stand in truth of who I am.

I don't stand blind to my adversary and I don’t taunt in retaliation. I don't spend my time looking at the thorns on the roses. I know enough not to touch them and when I do then I am fiercely aware of the pain they can cause. My attention is drawn to the beauty of the flower.

My beauty and worth as a whole being, fashioned by the creator as one who can find glory and grace, is where my focus needs to be. God deals with me in gentleness, yet His gentleness may look different than what I expect. He knows what He allows me are opportunities to be strengthened. I have a free will and can move away or draw near, unlike the rose.

Scripture tells us Paul had been shipwrecked, beaten, thrown in prison, and now was being misunderstood in the church he built. Because he allowed his weaknesses to humble rather than humiliate, he was able to find a supernatural strength. “We are afflicted in every way, but not crushed; perplexed, but not despairing; persecuted, but not forsaken; struck down, but not destroyed; always carrying about in the body the dying of Jesus, so that the life of Jesus also may be manifested in our body”. 2 Cor. 4:8-10.

They put a crown of thorns on Jesus’s head. The weakness of a man displayed on the Son of God was just another way of Him relying on the grace of His Father. Surely He took our sins and weaknesses, but He looked and saw beyond them and glorified God.

Three days after I received my roses, the petals fell. We live a short time and fade as the grass, James 1:9-11. Oh, may I not look down on the thorn that I have been given, but always bring praise to God in spite of it and gather strength from it. 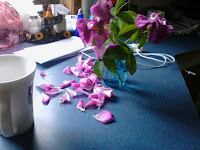 When Life Sucks You Dry (revised)

When life Sucks You Dry

June. The long awaited summer appears as cool, windy days imminently give way to scorching temperatures and still, stagnant air.  A month for love. Weddings, anniversaries, Father's Day. For me, A month of loss. I find myself counting; 1,2,3,4...people who recently have, or are in the process of, leaving my life, at least my sphere of physical accessibility. Then, those who I realize have left, not in body, but in heart. A loss of connection and communication, which leaves me wondering was there ever any to begin with? It is all too much.

As I think of it I feel the anxiety swell inside me. My breath is short. My lungs aren't wide enough, my eyes aren't big enough, my ears aren't tuned enough to breathe it, see it, or hear it all. The thought of  it sucks the life right out of me. The expression, 'life sucks', may sound as unrefined speech to some, but It certainly is so often accurate. Life on this earth can suck the very life out of you. Sheer madness on so many levels shroud sanity, veil reality, and make us as impersonal as technology.

We are striving to be noticed and heard, but in the process of doing so, we are squelched by the tone of our own voice. My volume, the way I stress my syllables, my physical stance, are used against me, interpreted as some persona depicted in a play. It is easier to press the delete button rather than face emotions and real life issues. As we advance in technology to exceed, we are giving ourselves emotional lobotomies. Let the emoticons describe you. They are silent and offend no one.

So, what do I do when I am trapped in this vacuum where my words, tears and feelings have been sucked out and left me listless while the onslaught of life's personal losses and universal tragedy are violently forced in, thus causing a mental and emotional asphyxiation.  My natural default is to withdraw, succumb to unconsciousness, be apathetic, and appease whatever appetite arises. After all... I'm impulsively grasping to breathe!

Christ made the exchange for us. Man's life fell when he chose to disobey. Christ's life arose when He chose to obey. A great exchange. My sin for His life. My distress for His rest. My despair for His hope. It doesn't seem like an even exchange, does it? In His unfathomable love, He gives the opportunity for me to live a balanced life, breathing in and breathing out hope.

Just as the body needs a balance, so do our souls. Proverbs 11:1 tells us "A false balance is an abomination to the Lord, but a just weight is His delight".  Life won't stop happening. People won't stop leaving. It will insist on sucking energy from me.

It hurts...all this leaving. I think of how I just took for granted one's presence. We 've known each other for some 30 years, yet the times we actually spent together in the past 10 were too few. Or my new found friend who was here only a short time and now has returned to his home state. To find someone new and your heart connects so quickly, it seems so unfair that it lasts such a short time. Then there:s the one who may leave, not even a definite yet, but inside already the emptiness is growing, like my heart is preparing me for what I know to be inevitable. I am fighting against it with my will, even as I know I won't win.

So as I exhale all this hurt what can I take in as an exchange that will put hope in its place? Maybe the benefits of knowing them. All of them are different, each with unique gifts they brought to my life. They all showed me hope. Instead of grieving their departure, can I rejoice with them? For they have hope yet to be realized in their future. Why should I selfishly bemoan that? There are others in my life who are still here. Those who need more time, more  attention, more conversation perhaps, now that I am reminded firsthand again how suddenly life can change.

And Jesus, didn't He die to His own self willingly so that we could have hope? He took the hardest road, the cross. It was not cheap. Salvation is free to those who ask, but without the trials that are meant to strengthen me I will never know the full power of this precious hope. It is process and we are growing in it.

So here is my opportunity to breathe in and out a hope that will keep me balanced and nourished while feeding others.
Posted by Mary Hood at 8:53 AM No comments: